In this strategic deckbuilding game, you are one of the rebel leaders, fighting to claim the Kingdom of Dorian! Choose your character and develop it throughout the game. You will acquire resources, build your army and travel around the map to battle for strategic locations. During battles, players choose their side in secret, revealing the outcome during the battle. The player that gets the most number of Influence Points (IP) wins the game! 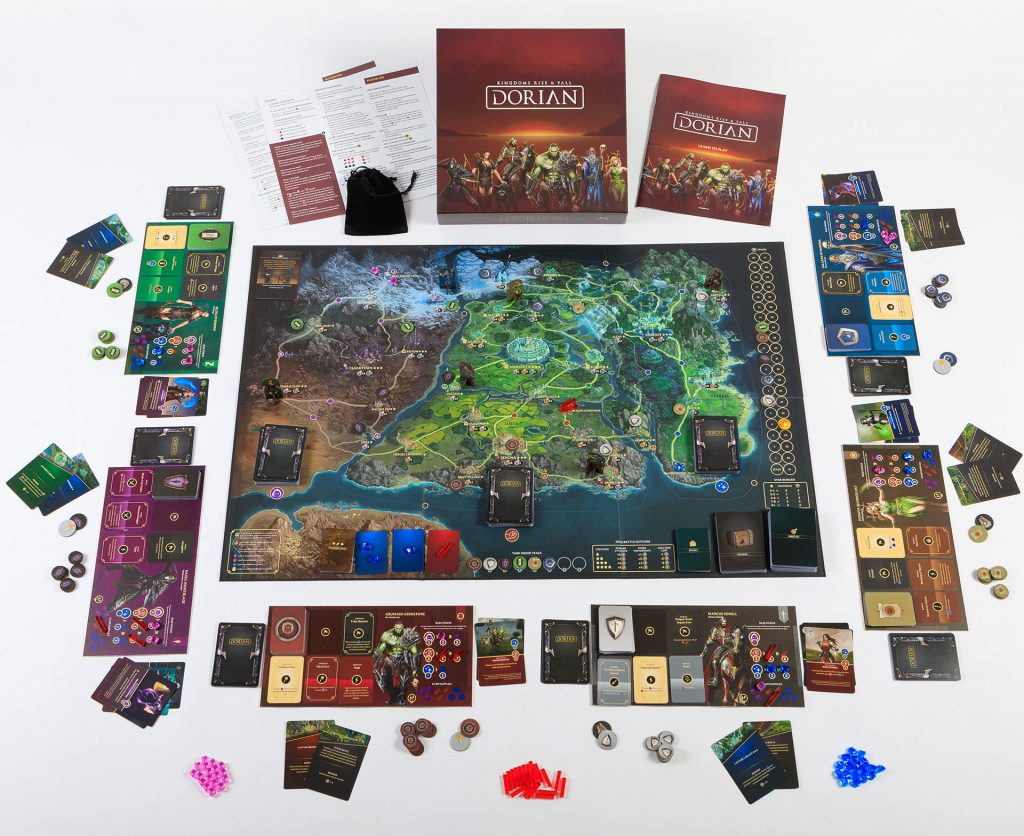 What we believe makes Dorian fun to play:

And finally, we enjoy creating a storyline and building fantasy worlds.

Deck building (making combo’s!), progress with your character, some area control and negotiating.

The King Hermus Dantes rules the Kingdom of Dorian with an iron fist, after he claimed the throne during the Dark War a decade ago. Feared by his rivals; he is considered the most powerful wizard, some even believe he is an immortal.

After a long period of peace in the Kingdom of Dorian, tensions are rising when the King was mysteriously assassinated. The Royal Guard found a heavily decomposed body, unrecognizable, but with the King’s clothes. Around his body, you could smell foul magic, and there were strange runes marked with blood. The Octagon of Supreme Wizards, advisors of the King, identified several suspects. They suspect leaders from different kingdoms, nobles from Dorian, cults that lurk in the shadows and followers of the dark God Umnial. Some rumors say that only the Octagon was powerful enough to stand against the wizard king himself.

Due to the unexpected death of the King, the royal army is uncontrolled and therefore vulnerable. Rivals, rebels and opportunists want to claim the throne. To put an end to the chaos and anarchy, the octagon of Supreme Wizards have taken over the kingdom. Banners that carry the mark of the Octagon hang high.

Spread over the Kingdom of Dorian, six leaders have now gathered an army to take the throne. The motives of these rebel leaders differ, but war is certain. The leader with the strongest army, most allies and strategic mind will take control and become the new ruler of the Kingdom of Dorian.

The Dark War
A long time ago the Kingdom of Dorian was shattered into four separate nations, and the leaders of these nations were at odds with each other. Lusta, Estaria, Moguras and the Vale were not able to establish political stability and everyone was just waiting for a war to break out. And so it happened. During a trade conflict between Moguras and Lusta, reprisal piled up and the war that everyone had feared for so long became reality.

Many innocent people died and poverty arose in both nations. Still, after a few months they were able to restore peace. At least, so was assumed. Because the leader of Moguras, Shadowborn Korvos, had no intention at all in maintaining the peace. He saw an unique opportunity during this period for building up his army in complete secrecy. After collecting enough troops, he took Lusta by surprise. Arvus Senona was ruler and head of the Senona family. He was able to withstand the first attacks but was quickly forced to seek help. Therefore he reluctantly visited Ischa Dawnblood in the Vale. However, briefly after his visit to the Vale, Ischa Dawnblood arrived at the gates of the capital city of Lusta with the head of Arvus impaled on a spear, and so Lusta was fallen.

Hermus Dantes, wizard and active leader of Estaria, learned about the alliance between Korvos and Ischa. It became clear to him that his beloved Estaria could well be their next target. To quell this threat, he formed the Octagon of Supreme Wizards, existing of six of his most powerful wizards. By combining the powers of these wizards he was able to end the war with the use of black magic and Necromancy. The dead arose from their graves and fought the armies of Korvos and Ischa. Although the black magic was extremely powerful, it also had terrible side effects. Plagues, diseases and mental illness spread through the lands of the Kingdom. After weeks of bloody fights, diseases and devilish combat, Dantes succeeded in driving out the enemy troops from Lusta. But Hermus Dantes did not stop there. He does not like to take any chances and his ever-growing army of the undead marched on through Moguras and the Vale. The power of his Wizards increased by each village and city they conquered.

After they had total control, Hermus Dantes crowned himself to be King of all four lands and created a Kingdom with four provinces. He called it: the Kingdom of Dorian. Named after his only son, who was murdered at the age of eight.

Now that he has taken control of the entire region, peace and stability finally was established. But the people of Dorian had suffered so much from the war and black magic of the Wizards. Many villagers died by the plagues or were killed by the army of the undead. From that day, black magic became a taboo and practicing it has been strictly prohibited. Most people did not even dare to talk about it. Everyone who has experienced this Dark War knows: never again… 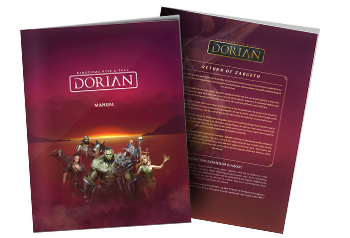